Create an Account - Increase your productivity, customize your experience, and engage in information you care about.


The Cary Cemetery dates back to the early 1800’s, with tombstones indicating burials as early as 1839. Tombstones of soldiers who fought in the Civil War are commonplace throughout the cemetery. Early leaders and developers of the village are also buried in the cemetery. William D. Cary, the founder of the village, is one of the cemetery’s most visited gravesites. In 1986, the Cary Cemetery became an honorary historic landmark by the McHenry County Historical Society. With its historic burials, ornate headstones, and peaceful scenery, the Cary Cemetery is one of the most revered properties in the village. The Village of Cary is the proud caretaker and protector of the cemetery, one of Cary’s most important sites. 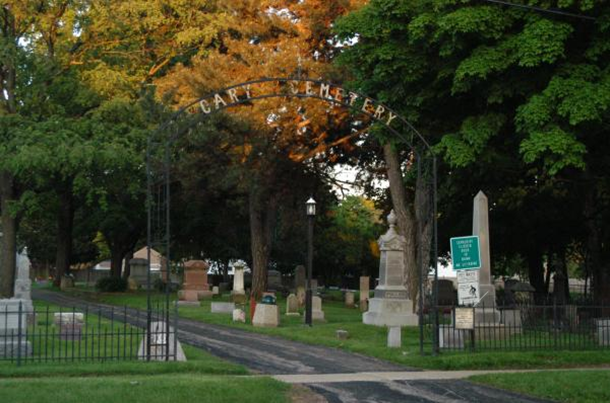 Apart from its historic significance, the Cary Cemetery remains a functional burial ground. The cemetery offers interments and cremation burials to individuals and families. Burial in older sections of the cemetery is limited to individual spaces. However, the southeast section of the cemetery remains a viable option for those interested in purchasing multiple lots.
Please review the Cary Cemetery Standard Operating Procedures

The following is a list of services offered by the Cary Cemetery. Please contact the Village of Cary at (847) 639-0003 for more information on lot purchases or burial services.